“Stop judging yourself…because all it does is make it worse.”

Jen’s earliest memories of depression date back to her junior year of high school, when the winter months would make her feel down and tired and her thoughts became very negative. In college these feelings persisted, and got even stronger. Usually an extrovert, she began to withdraw from her social activities and preferred to be alone, so she knew something was off.

Aware that anxiety ran in her family, the pattern of her feelings made her suspect seasonal affective disorder. When she went home on break she saw a doctor who agreed with her hunch and prescribed her the antidepressant medication, Zoloft. Feeling jittery and uncomfortable, she stopped the medication shortly after. She felt better being away from the stress of school and the sun was shining again, so she guessed the depression was seasonal and manageable.

Over time, Jen’s depression worsened and she began having anxiety and signs of ADHD. To Jen, her depression felt like complete hopelessness. She wouldn’t move from bed, bingeing on Netflix and comfort food. Then her anxiety would manifest, often as panic attacks with physical pain in her chest and gut, causing her to lose her appetite for long stretches.

Deciding it was time to try getting help again, she continued her process to find a treatment that would work for her. Her doctor prescribed Paxil because it had been effective for her mother. It seemed to take the edge off of her depression and anxiety, and with that came some relief.

A body and mind divided

When Jen began to fall in love with a man in the military, heightened feelings of happiness overshadowed her low moods; she only noticed her continued depression because her body would respond with familiar seasonal symptoms of lethargy and lack of appetite and sleep.

Jen always wanted to be a mother so when they got pregnant, she was overjoyed. For the safety of the baby, she needed to go off of the Paxil during her pregnancy. She remembers having a difficult time with the hormones, constant nausea, and swirl of emotions surrounding pregnancy and approaching motherhood. Her son was born via C-section.

I remember one day sitting on the couch with my newborn and he was a week old and thinking, what now? What do I do? I guess there’s more to life than just this. Yes, I love him, and he’s great, but he’s just kind of laying there and I’m exhausted.

This exhaustion and emotions led Jen to return to medication – this time Prozac. She remembers feeling even keeled on a regular basis on the meds, which was certainly better than her depression or panic attacks. But overall she felt “blah.” She always appreciated her ability to feel the ups and downs of life and go deeply into her emotional world, but now her emotions were flat and colorless. She had heard about Wellbutrin as an addition to Prozac, and with help from her doctor gave the combo a try.

And honestly that changed my life. Once I got the medication that worked for me and for my body, it was the best that I had felt in a very long time. And not just mentally but physically, my body seems to be more normal.

This combination got Jen feeling not only like she was effectively managing her anxiety and depression, but like she was really herself again. It also gave her a deep appreciation for being able to feel the sensations in her body, including recognizing the things that were helpful to her health and those that were harmful.

The scary feelings of anxiety and depression flooded back immediately after her second child, a daughter, was born. Jen was in the hospital for 3 days and was so anxious that she didn’t sleep at all. By the time she got home, she had a familiar sense of numbness.

I have this memory of my mom holding my daughter on the couch, and looking at my daughter and feeling nothing. Just nothing. No attachment, no love, no, “Oh, I want to hold her.” It was just … it wasn’t there. And of course then I had a panic attack because you’re not supposed to feel that way about your baby.

Jen’s self awareness and compassion helped her realize she needed a bit of space, so she went to her shower – her happy place – to try and understand what was happening. As she grappled with her feelings, or lack of them, she started falling asleep in the shower with her eyes open. The physical and emotional exhaustion were taking a toll and she decided to take it one day at a time.

One day out of the blue, I remembered that senses are related to memories and feelings, and, I decided to go and buy the shampoo that I’d used on my son. And I started using that on my daughter, so I would smell that on her. It made a world of difference because then my brain started connecting everything that was happening. It was my baby aromatherapy.

Over time, her attachment to her daughter grew and bloomed until she was her normal self – a doting and loving mother.

Jen believes that depression is not just extreme sadness and that anxiety is not just overwhelming stress – but that they are different things entirely. With this in mind, they have to addressed in the right way, which includes multiple approaches to treat and manage the different aspects of each condition.

To supplement her medication, Jen learned self-care approaches that work for her. Mindful breathing helps her feel like she has more power over what’s happening in her body. She also sees a therapist regularly to talk about her experiences and get compassionate support and guidance.

Medication is fantastic, but there’s nothing like having therapy and really learning from others who understand this – whether they’re professionals or people who’ve gone through it.

Jen has learned a lot on her depression journey. For one thing, she recognizes that feelings of shame and insufficiency are universal and that none of us is immune to depression.

My mantra is that we all have issues. It’s the way it is, and that’s okay.

Depression doesn’t look a certain way. I’m very good at putting a mask on and presenting myself one way regardless of what’s going on inside of me. There are people who are smiley and upbeat and their Facebook looks perfect and all of that, and they’re struggling horribly.

It makes sense that people have anxiety and depression, especially in the world we live in today. It’s not a weakness, it’s not something that anyone should feel like they need to hide. It’s truly a manifestation of what is going on in your mind and in your body.

Jen believes an important antidote to this is compassion, for yourself and others.

Jen is now focused on spreading that message of self acceptance and self compassion, acting as an example that if you disregard the stigma, and accept or even embrace your depression, you can gain power over it.

I feel this is what I’m called to do. To get on a big ol’ megaphone and yell out to the world, “I’ve got depression and anxiety and ADHD and this is what my experience has been. Hey, look at me!” And just to kind of let people know it’s okay. And you can get through it. Christina looked like the girl who should be peppy and fun. In reality, she felt a deep sense of shame and guilt. 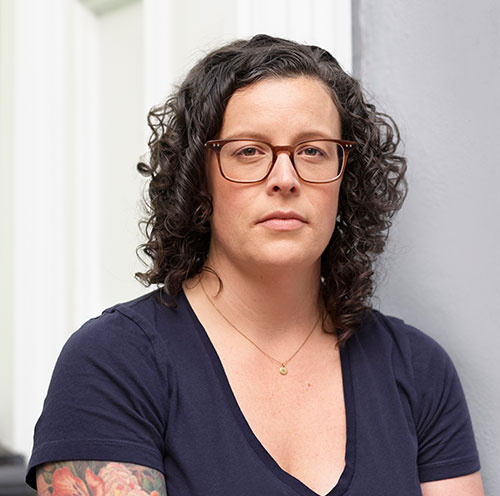 Annie’s mind was consumed by thoughts of failure, guilt, and worthlessness. In her struggle to connect with and care for her young daughter, she neglected her own needs and kept her torment private, until the shame compounded into something unbearably painful. “I’m not gonna let this thing control my life.”

When you’re deployed, you bury any fear and keep it together, staying focused on the people and the mission. So that’s what Joe did.